What is a 3D Artist? 3D Modeller vs 3D Surfacing Artist vs 3D Rigger vs 3D Animator Explained

When you study 3D design at AIT, you will be setting yourself up for a rewarding future career. But what sorts of jobs are out there for graduates? We spoke with AIT’s 3D subject coordinator, Adam Moder to find out more about the different roles that could be available to graduates of our 3D design courses. Adam recently provided an incredible live demo, showing his own process when animating a 3D character using Autodesk Maya, and here he dives into four different roles in the world of 3D design - explaining what it’s like to work as a 3D modeller, a 3D surfacing artist, a 3D rigger, or a 3D animator.

Prepare for Your Dream Career with AIT’s 3D Design Courses

If you have been searching for a 3D modelling course, then you’ll probably be thrilled to learn that there’s an entire unit devoted to 3D modelling in your first year of a 3D design course at AIT.

You will also have further opportunities to focus on this aspect of 3D design throughout your projects and electives.

A 3D modeller utilises specialised software to construct a 'polygon mesh' in three dimensions, either matching an existing design - or developed as a unique asset. Components of the polygon mesh - vertices, edges and faces - are essentially transformed to refine the underlying volumetric forms, and established techniques such as extruding, revolving, appending, cutting and inserting edge loops are utilised. The constructed geometry needs to be clean and effective, with topology that can be optimised for different resolutions, 'unwrapped' to display convincing surface detail and deformed realistically for posing and animating. 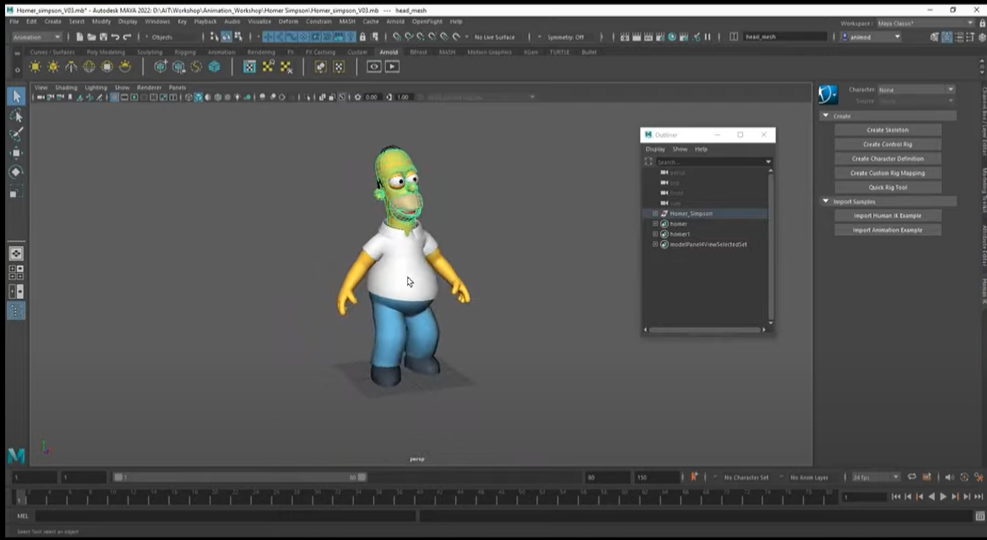 Adam demonstrates use of the polygon mesh in Autodesk Maya.

One of the reasons that our 3D design graduates are so successful is because they gain a diverse skill set that can be applied to roles within the film, animation, games and design industries.

We pride ourselves on getting to know our students’ passions, sources of inspiration and their unique artistic style. If you develop a passion for 3D surfacing through one of our 3D design courses, then you will be encouraged to develop your skills in this area, and you will graduate with a portfolio that proves those skills.

Adam: A 3D surfacing artist or technical director is focused on applying convincing and appealing materials and detail to the surface faces of a polygon mesh.

Physical properties such as diffuse colour, specularity, roughness, bumped and recessed detail, transparency, reflection, refraction, ambient occlusion and sub-surface scattering are all simulated by the surfacing artist - and this can change the 'look’ of a 3D asset to adopt distinct styles - falling anywhere between standards such as cartoony, realistic or painterly. For that reason this process is also referred to as 'look development'.

Surfacing is achieved by applying specific 'shaders', to which 2D, 3D and procedural texture mapping is added - simulating familiar physical materials such as metal, plastic, wood and glass in various states of tarnish, decay, rust or damage. An understanding of how light physically interacts with such surfaces is integral, and surfacing artists also use specialised tools to simulate hair, fur, feathers, cloth, fluids, smoke, fire and other advanced 'simulated' effects.

As you study 3D design, you might find that you really enjoy the technical aspect of design – solving problems and making things work. If so, then a role as a 3D rigger might be perfect for you.

Adam: The 3D rigger is somewhat more of a technical role, and is responsible for creating a specific 'rig' and 'control system' so that an articulated 3D model can be posed and animated, with convincing deformations.

The illusion of an organic character body that can bend, twist and stretch is typically created for 3D characters and creatures - and accurately simulating skin or cloth stretching over bone, muscle, tendons and ligaments is usually the primary goal. Exaggerated squash and stretch for cartoony animation is also a common requirement of a 3D character rig, and for advanced realistic creatures such as dinosaurs and dragons, an underlying 'muscle system' is often utilised.

The basic process of rigging involves initially creating a hierarchical system of virtual bones or joints which can be transformed (moved, rotated and scaled) in a predictable fashion. The character or creature mesh is then 'skinned' or bound to this skeleton, and effective skin weight painting is applied for each vertex to enable convincing deformations.

Finally, a series of 'controllers' is added to complete a fully functional and intuitive 'control rig', so that animators can then quickly and predictably create distinct poses as required. 3D riggers will often embellish the rig's functionality with custom attributes, employing scripted, driven and constrained relationships between key 'controllers', 'deformers' or 'joints'.

3D rigging is also needed for mechanical assets - such as vehicles, machines, weapons and robots - and 3D rigging is especially important in game development, where characters, creatures, vehicles and weapons need to respond to player input in real time.

Adam shows how movement can be created once the character has been rigged with controllers.

If you study 3D animation, then you might assume that you would automatically become a 3D animator. However, this is a unique role with its own responsibilities and opportunities just like any other.

When you study 3D design at AIT, you’ll have the chance to investigate different roles and to find the ones that appeal to you most. As you complete collaborative student projects and form your own ‘production team’ you will be given the opportunity to really zero in on the skills that you want to learn and practise.

Adam: A 3D animator is essentially responsible for 'breathing life' into a 3D character, creature or prop.

Following the traditions and principles of classic 2D animation, 3D animators start by 'blocking out' a series of clear, expressive and dynamic poses - typically referred to as 'key storytelling poses' and 'breakdowns'.

When the timing of this blocked motion is approved, further breakdowns, extremes and in-betweens are added to refine the motion and apply fundamental principles such as anticipation, arcs, squash and stretch, timing and spacing, overlapping and secondary action, exaggeration, easing and appeal.

In the final and most time-consuming stage, animators polish the animation to achieve as high a degree of realism and appeal as possible. 3D animators are generally focused on two broad areas - convincing 'body mechanics' - which involves depicting realistic physics - weight, balance, force, acceleration, momentum and inertia - and 'performance animation' - which is related to acting, appeal, empathy and audience engagement.

3D animators need to show not only how a character is physically moving, but also what that character may be feeling or thinking on the inside, animating body gestures, poses, facial expressions and lip sync for dialogue is typically achieved by transforming a character 'control rig'.

Adam shows how animating a moment of anticipation helps to breathe life into the character.

The 3D design courses at AIT can prepare you for a range of roles and an exciting career – it’s all up to you! You will receive a solid grounding in 3D design principles and the skills and tools that are used within the industry. From this broad overview that includes networking, internship, and portfolio development opportunities, you can zero in on the particular roles and skills that appeal to you the most.

To find out more about studying one of our 3D design courses in Melbourne or Sydney, you can contact a course advisor, or download a course guide today.